Written by Nir Cohen
Updated over a week ago

Let's say you're running a lab that's configured to expose a web interface to the public internet, for example, a Jenkins server UI. Since replacing the labs, or, in the case of on-demand, stop-starting them will most probably change the hostnames as well, your students will have to figure out the new hostname for each lab every time.

Strigo provides a simple solution to overcome such issues by providing a static hostname for each lab (per student) that never changes. What's even cooler, is that it resolves both public and private IPs, depending on where you access it from.

Each lab will be assigned a hostname that looks somewhat like so:

Let's say that your lab has the following parameters: 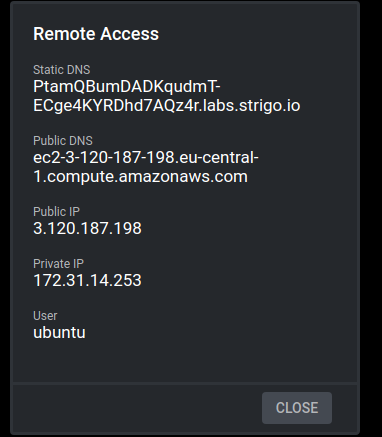 This DNS address will never change for the same lab, meaning that:

We intend on using this functionality to bring an even more robust experience to lab communication in the future.

Did this answer your question?